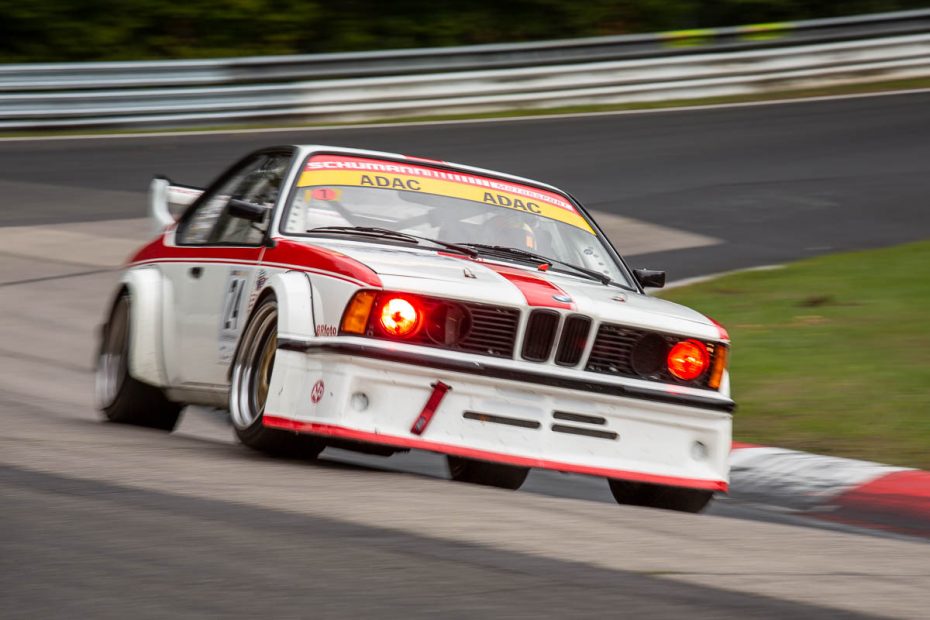 Peter Schumann, Jürgen Schumann, Olaf Manthey and Jochen Kiesch were the winners in the BMW 635 CSI after completing 28 laps in 5:07:43.91 hours. Starting the race from ninth place, they only had to concede the lead position to the team of Markus Dünkelmann, Christoph Breuer and Andy Gülden for one lap in the first 20 laps.

Nordschleife legend Olaf Manthey at the wheel with the winning team

The notorious Eifel weather once again provided excitement in the wide circuit of the Nürburgring. After 21 laps, for safety reasons and to prevent accidents, the race was briefly interrupted and restarted due to rain and the resulting pollution.

An overjoyed Peter Schumann at the finish: "Pure joy and a compliment to the other drivers and the whole team, everyone did a super job." Olaf Manthey, who drove the start stint, added: "It was great fun to start here and the fight in the first laps with Andy Gülden was something special.

Race weekend with all facets, Eifel weather makes the race exciting with action in the pit lane

But even Gülden, who had to park the Porsche 911 RSR in the first hour due to a lack of propulsion - probably differential damage - was still able to take something positive from the opening phase and confirmed the statement of the proven Nordschleife expert Manthey. "The first three laps were awesome! It's always a great pleasure to fight with such a legend as Olaf Manthey."

As in the previous year, it was the Porsche 964 teams that came up trumps in the 1000km race. The father-son team Alexander, Vincent and Carl-Friedrich Kolb could be happy about the second place.

Capricious weather in the Eifel

"We again experienced a great event with constantly changing conditions. After crossing the finish line, faultless driving helped us to second place in the overall standings and to class victory. The team around Patrick Simon prepared a super car that mastered the long distance without any problems," was how a satisfied Vincent Kolb summed up the race.

Jürgen Penz and Dennis Fetzer, who also brought a 964 Porsche to the start, followed in third place, 1:50 minutes behind. The 21-year-old Fetzer was thrilled: "We'll do that again, it's great fun with the historic cars."

The man after the re-start - here the result after 20 laps was used as the starting grid - was certainly Nick Salewsky. Together with Matthias Wasel and car owner Michael Hess in the Porsche 911 RSR, he gave it his all once again and was able to leave his competitors behind after the re-start. Thus, after adding up the results, the trio moved up one place from fifth place.

The "losers" of the second session were last year's third-placed drivers Jürgen Rudolph and Heiko Hammel (Porsche 964 Cup). After 20 laps they were still in second place behind the eventual winners and completed the Top 5. "Due to the interruption of the race, our tactics didn't work out, we were on course for a podium and wanted to attack again with slicks!

The fastest drivers in practice, Marc and Dennis Busch, were unlucky as they were unable to bring the Porsche 911 Carrera RSR to the start after a collision in practice.

The individual classes were fought until the last second and everyone who saw the black and white chequered cloth could feel like a winner!

Satisfied conclusion of the organiser

Head of organisation Henning Meyersrenken was extremely satisfied after the race. "Our idea of reviving the ADAC 1000km race at the Nürburgring has succeeded again in its second year, judging by the response from the drivers and teams. There were special conditions today for all the participants who took the unique endurance race on the Nürburgring full circuit under their wheels. They were particularly challenged today in terms of their race tactics and adapting their strategy. Above all, I would like to thank the many voluntary helpers, track marshals and fellow campaigners who supported us despite the challenging circumstances. Without their cooperation and the support of our cooperation partners, such an event would hardly be feasible!

We are already looking forward to the next edition, when we will be back at the start here in the Eifel from 15-17 September 2023."